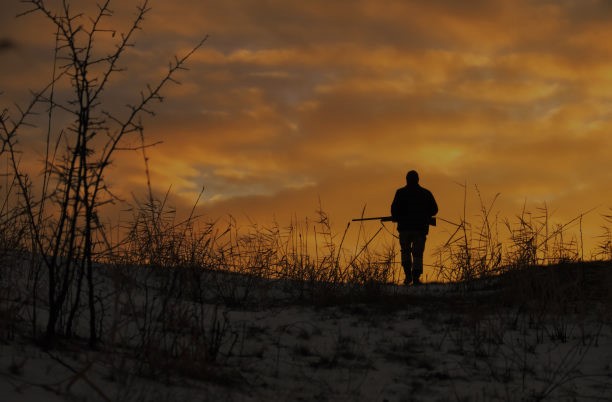 Many of these beautiful lethal guns are operated by people with scrambled egg minds who squeeze beer bellys into upstate pick-up trucks with gun racks mounted in a rear window just behind them within reach of powerful spotlights to stun animals just before the kill.

They teach sons how to go deep into dark woodland to stalk and kill with “Kentucky windage” lest the breeze give the animal a slight advantage.

Television is routinely blamed for the violence in our society, but this is fantasy violence. On film, on a screen, into a living room. But it takes face and form and becomes real when macho fathers and grandfathers teach a kid how to march at dawn into a wood lot to stalk and kill an animal. They call it hunting, the least honorable form of war on the weak. It is on these cold mornings that children first learn the technique and protocol of killing. Some, as early as age six, are given camouflage pants and outfitted in battle fatigues and presented with BB guns, lethal sling shots, bow and arrow, and pellet guns. Thus suitably armed, they go, stealthily and proudly with their fathers, uncles, and grandfathers, to the animals habitat. They are then taken deep into the woods and instructed in the proper way to decoy, distract, or lull an animal prior to shooting it to death. They are tutored in the proper way to crouch, aim, and squeeze the trigger and handle the recoil against their shoulder. All this is so they are ready when an animal appears in the crosshairs of a magnifying scope. It’s all about power for people who don’t have any – and it teaches children that life is not valuable.

And don’t be too quick to blame the little chubby killers with the pimples and crew cuts who are shooting up schools in our nation. Blame the fathers. And the grandfathers. Blame us.