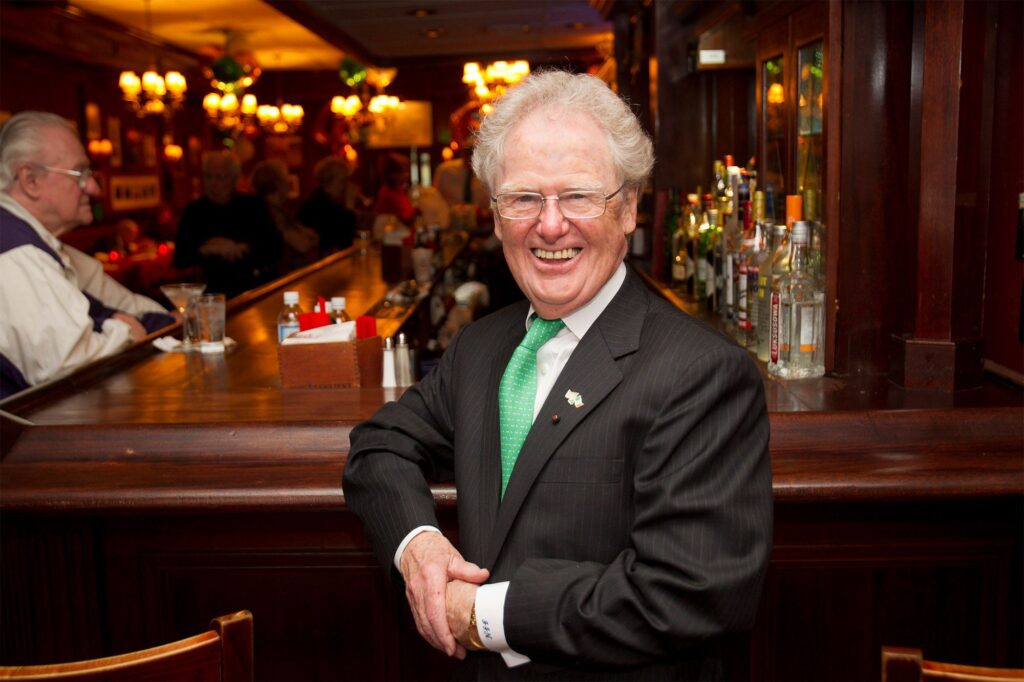 A rich man who is head of an international Gourmet Society once told me: “The Best Restaurant is the one where they know you the best.”

I always looked forward to a warm greeting from Bruce Snyder at “21” … Joe Migliucci at Mario’s in the Bronx … James O’Shea and the late Charlie Kafferman at the West Street Grill in Litchfield … Sirio Maccioni at the mighty Le Cirque … Bruno Dussin at Circo … Sergio Vacca at Harry Cipriani … Julian Niccolini and Alex Von Bidder at the Four Seasons … Michael DeLullo at the Venetian in Torrington, an old CT mill town … Gerry Biggins at P.J. Clarke’s (the Mother Ship on Third Avenue) … I also loved seeing Joe Valeant of Bernie Murray’s and Tommy Moretti in upstate Elmira … Franco Lazarri of Vice Versa on the West Side … Tony Federici, the Parkside maestro and his deputy Alfredo Chiesa in Corona, Queens … Gerardo Bruno of our beloved San Pietro and Dino Arpaia of Cellini. Also Samantha Tilley of Mockingbird (a cooker and a looker!) … ditto Alyssa Potts, proprietor of the Fife and Drum in Kent. And we’ve recently discovered Lisa Burnett and Suzanne Pond at La Tavola in Waterbury and Gigi D’Amico and Michael Cavallo and a knockout named Lucy Piche at Mangia in Watertown, also in Ct.

New York is littered with ersatz Irish pubs. A few stood out from the pack of touristy joints: Gerry Toner’s Kennedy’s, Des O’Brien’s Langan’s, where Neal Travis and Steve Dunleavy hung out when Rupert Murdoch picked up their checks, and Costello’s where James Earl “Jimmy” Breslin would preside with his unique facility with the mother tongue.

And even those private clubs which abound for the rich and famous have some stellar practitioners of the Cordial Welcome: Teddy Suric of the Harvard Club … Colin Burns, Sr. of the greatly heralded Winged Foot … Tim McCormick of the New York Yacht Club … and Anne-Marie Fillipini of the Torrington Country Club. All hear the same music of how to make people feel welcome when they are lonely, hurting or just hungry.

But there was only ONE Jimmy Neary. He was the most beloved publican of the great city. Sui generis is the word. And he was also sui generous. This gregarious, gracious Irishman had a unique gift for hospitality which drew governors, writers, publishers, bishops, moguls, presidents, senators, mayors, and the rich widows and denizens of tony Sutton Place to his care and keeping at the legendary saloon on East 57th Street.

He gave them food for sustenance … and booze, tho’ he never partook of the demon. And everyone at his bar always looked like Pat Moynihan, Hughie Carey or James A. Farley.

At table there was usually Pat Barrett, the upstate New York State politico who made a score with Avis, D.J. Carey (nephew of the governor), Kevin Barry McGrath and “Don’t Worry” Murray Richman, the power lawyers, and Tom Werblin, son of Sonny … and our magnificently gifted and articulate Cardinal Timothy Michael Dolan who was a frequent – I’d better make that occasional – visitor. Also Jonathan Bush, who was as nice a patron as Jimmy was a host … a regular from the neighborhood.

Jimmy was keen on a Queens guy named Donald John Trump who became president of the United States. And Neary didn’t waver or apologize for it. Speaking of which, he forgave me for my own enthusiasm for Mario Matthew Cuomo, another Queens guy. Neary much preferred George Elmer Pataki.

Regulars at Neary’s breathed a huge sigh of relief when it was announced yesterday that Jimmy’s Podium and forum … his beloved saloon and restaurant … will continue under the watchful care and keeping of Una.

Bloomberg staffers Kevin Sheekey and Dan Doctoroff hung out with Jimmy. And their boss Michael Bloomberg, who has a habit of doing nice things for people, took Jimmy to Ireland on his personal plane to meet up with relatives.

Cardinal Dolan took him to Rome, to the Vatican. And on Saturday at Saint Patrick’s Cathedral, he’ll introduce him to Heaven on high where he’ll present Jimmy to the Celestial Maitre’d … whose name, I believe, is Peter, who will almost instantly recognize Jimmy Neary and escort him to a very great table, indeed.

“Ah … yes … the Cardinal Archbishop of New York personally made your Reservation, Sir. Come right in. Incidentally, the Owner, who is in charge of everything here, has been asking for you !” It has to happen that way.

There was only one Jimmy Neary.

He was the most beloved publican of the great city.

And a dear man.